In honor of Hanukkah, we’ll discuss olive oil and a couple of its health benefits.

Olive oil makes a great salad dressing. But, have you ever thought about olive oil health benefits outside its nutritional properties? 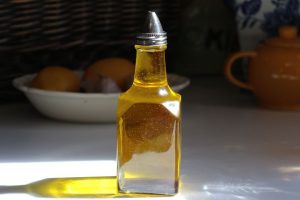 “My mother takes care of my health. She makes sure that the food cooked is in olive oil.” – Erica Fernandes

Here are two ways olive oil may help your health.

Strokes are a serious risk for many adults.

To determine the connection between consuming olive oil and stroke prevention, researchers followed 7,625 people without a stroke history.

The researchers categorized the participants based on their olive oil usage.

Although all participants were the same at the baseline, after 5 years, 148 of them suffered a stroke.

It turns out the people who used olive oil regularly were 41 percent less likely to suffer from a stroke than those who never used olive oil.

The study couldn’t pinpoint any causal effects of olive oil on preventing strokes, but the data seems to almost speak for itself.

Apparently, it can also help you look younger. Dr. Will Clower tells a story about an 88-year-old woman who he had mistaken for a being a 72-year-old at most. He was shocked and asked her what she’s doing.

It was the olive oil, she said. Growing up in an Italian home, she had olive oil daily, not only in her foods but on her skin.

Is olive oil a proven anti-ageing cream? Is there evidence that it’ll prevent you from getting wrinkles? Maybe not yet, but why not give it a try?

Your older self may thank you one day.

Do you use olive oil?

What are your thoughts about olive oil health benefits?