COPD, (chronic pulmonary obstructive disease), is an umbrella term describing lung diseases such as emphysema, chronic bronchitis, and non-reversible asthma. This disease is characterized by increasing breathlessness. COPD can be managed, but not cured. It is the third leading cause of death in the United States, with more than 11 million diagnosed. Millions more may have the disease without knowing it.

The 5-year mortality rate ranges from 40% to 70%, depending on disease severity, while the 2-year mortality rate is  50%.  Moreover, overall survival rates are worse compared to people with many common cancers. Indeed, COPD is the only leading cause of death that is increasing. (See Graph-2). 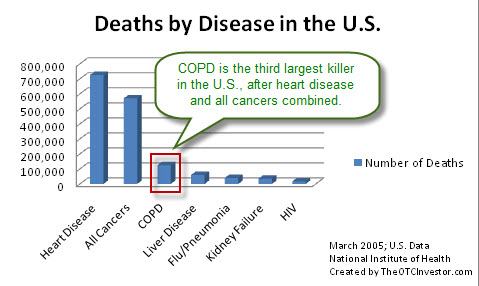 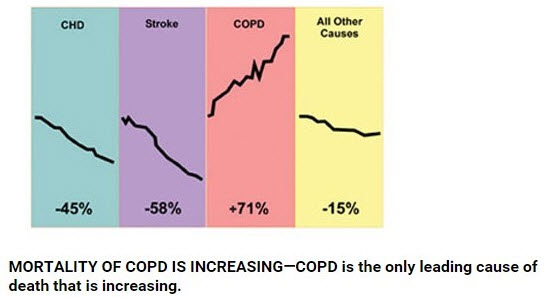 COPD most often occurs in people 40 years of age and older who have a history of smoking. These may be individuals who are current or former smokers. While not everybody who smokes gets COPD, most of the individuals who have COPD (about 90% of them) have smoked.

Non smokers can still develop COPD. Absence of the Alpha-1 Antitrypsin protein is the genetic risk factor for emphysema. Without the Alpha-1 protein, white blood cells attack and destroy the lungs. The World Health Organization and the American Thoracic Society recommends that every individual diagnosed be tested for Alpha-1 protein.

Rehabilitation for COPD patients is not a one size fits all protocol but can be tailored to the severity level of the patient.

Some techniques used are:

There are COPD patients that can be rehabbed with more natural methods that will build fitness and make breathing easier, such as the following:

Exercises may done one-on-one with a trainer or as part of a group. Exercises that are effective in making breathing easier are:

Lower body: Most rehab centers offer a set of exercises that center on leg workouts. They vary from simply walking on a treadmill or around a track to more intense stair climbing. Most of the proven benefits of pulmonary rehab are shown in studies of people doing leg exercises.

Upper body: The muscles in the upper body are important for breathing, as well as for daily activities. Arm and chest exercises might include turning a crank against resistance or just lifting your arms against gravity.

Strength training: Most pulmonary rehab exercises focus on building endurance. Adding strength training, such as lifting weights, has been shown to be helpful as well.