Bronchitis is an inflammation of the lining of your bronchial tubes, which carry air to and from your lungs. People who have bronchitis often cough up thickened mucus, which can be discolored. This disease may be either acute or chronic. The Acute is very common, and often develops from a cold or other respiratory infection. On the other hand, chronic bronchitis is a more serious condition, and presents as a constant inflammation of the lining of the bronchial tubes. 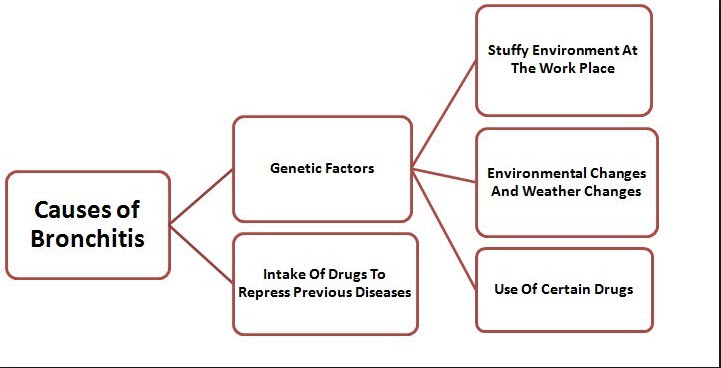 When the bronchial tubes that carry air deep into your lungs, become inflamed, the inner lining grows thicker, which then causes a narrowing the breathing passages. These irritated membranes also secrete extra mucus, which coats and sometimes clogs the small airways. Coughing spells are the body’s way of trying to clear out these secretions for easier breathing.

The main symptom of bronchitis is a cough that persists several days to weeks. Additional symptoms that may occur are:

Fever is unusual and often suggests pneumonia or flu.

Acute bronchitis often develops three to four days after a cold or the flu. It starts with a dry cough, and then segues to severe coughing spells that can bring up mucus. Most people get over acute bronchitis within two to three weeks, although the cough can continue for more than four weeks.

The chronic version is defined as a cough with phlegm for at least three months in a year, for two years in a row. Chronic bronchitis is a serious condition that makes your lungs a breeding ground for bacterial infections and may require ongoing medical treatment. It’s one form of chronic obstructive pulmonary disease (COPD), a lung disease that makes it hard to breathe. The “smoker’s cough” is sometimes a sign of bronchitis and COPD. Stop smoking!

The symptoms of bronchitis are often the same as those of other conditions, such as asthma, pneumonia, allergies, the flu, and lung cancer. Of course, serious illnesses like pneumonia require immediate treatment.

This form of is more common in winter and nine out of 10 cases are caused by a virus. Irritants, like tobacco smoke, smog, chemicals in household cleaners, even fumes or dust in the environment, will trigger it.

Smoking is by far the most common cause. Workplace exposure to dust and toxic gases is a much less common cause, and is seen in miners and grain handlers. Air pollution can make the symptoms worse.

A smoker who gets acute bronchitis will have a much harder time recovering. Even one puff on a cigarette can cause temporary damage to the tiny hair-like structures (cilia) in the airways that brush out debris, irritants, and excess mucus. Continuous smoking will further damage the lungs and lead to chronic the damage and increases the chances of chronic bronchitis. At that point, there can be an increased risk of lung infection and permanent lung damage.

Treatment is straightforward. Drink lots of fluids, get plenty of rest, and avoid smoke and fumes. A non-prescription pain reliever will help with body aches. In addition, take an  expectorant to help loosen mucus so it can be more easily coughed up and combine it with an inhaled bronchodilator medicine to open your airways.

You must stop smoking. Also consider getting a pneumococcal vaccine as well as the annual flu vaccine.

This combination are the two main forms of chronic obstructive pulmonary disease, COPD). Doctors may prescribe bronchodilators, which are drugs that help open constricted airways. Oxygen therapy can help some people breathe better and a pulmonary rehab program may also improve your quality of life. Quitting smoking is a must to stop further lung damage.