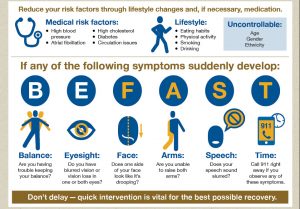 The old saying that “what you don’t know won’t hurt you” may be occasionally true. But not when it comes to myths about strokes.

According to the CDC, strokes – also known as CVAs (cerebrovascular accidents) – are the fifth leading cause of death in the United States. They’re also one of the medical conditions peope tend to have a lot of misconceptions about. Today we’re going to debunk 7 myths about strokes because yes, what you don’t know really could hurt you – or your loved one.

This #1 myth about strokes is really sad because people who believe it are endangering their health. There is so much that can be done to prevent strokes – especially second strokes. If your loved one has already had a CVA, encourage them to talk to their medical team about lifestyle changes that are literal lifesavers. Diet, exercise, weight management and more can make the difference between a one-off stroke and a recurring problem.

Myth #2: Only the elderly are at risk for strokes.

Not true. While most strokes do occur in people over the age of 65, a full 25% of stroke victims are a lot younger than that.

Actually, it’s not. There’s even an acronym for it: BE FAST.

Notice that there’s no “P” in the BE FAST acronym. That’s because, generally speaking, strokes aren’t painful. Hemorrhagic strokes – caused when a blood vessel in the brain bursts – can sometimes be accompanied by a headache, but that’s it.

Myth #5: There is no treatment for stroke.

This is another really sad one. The sooner the stroke victim gets medical treatment, the more can be done to prevent lasting damage. Prompt medical treatment, together with a stroke rehab program, can help a large percentage of stroke survivors go back to leading full lives.

Wrong. All strokes need medical attention, no matter how “small” and regardless of whether or not the symptoms go away. A small stroke puts the victim at really high risk for a second stroke, so make sure your loved one gets to the emergency room. If they live in an assisted living or skilled nursing community, alert the staff immediately.

Myth #7: Strokes can be treated with aspirin.

This is dangerous. Aspirin does nothing for strokes in the best case scenario and will make things worse if the stroke is a hemorrhagic one. If you suspect a stroke, don’t give your loved one aspirin, get them to the hospital.